The piper must be paid

Shortly after I started my Blogspot blog in the summer of 2005, a panda cub was born in Washington, DC. The National Zoo put up a PandaCam that allowed us to watch him grow from a squally pink "stick of butter" to a beautiful black and white bear. He would be named "Tai Shan," Chinese for "Peaceful Mountain," and Tai Shan would become a sensation. He reawakened my childhood love for pandas. Of course, anyone who read my blog could see that pretty easily, as I posted links and panda pictures quite frequently.

He'd go to China. We knew that. All American zoo pandas are rented from China, and American-born cubs are considered Chinese property, too. He was supposed to go after 2 years, but his time in Washington, DC was extended to 4 years. Well, now it's time to pay the piper. He's leaving us in January or February 2010. The National Zoo was considerate enough to post a a FAQ, which of course doesn't answer what we really want to know. DCist.com has put up a photo gallery documenting his extreme cuteness.

He's a big boy now, literally and figuratively. He weighs almost 200 pounds and is just about ready to father some cubs. He paces around his yard in the zoo. Of course he needs his natural environment and other pandas around. Of course it's time for him to go. Of course the world needs more pandas. 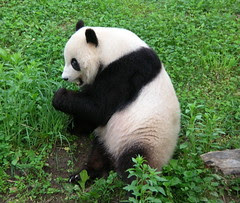 Tai Shan's personality (pandality?) is as lovable as his sweet face and chubby body. He's a bright, curious animal who sniffs *everything* in his yard and learns quickly. I have faith that after some adjustment, he'll enjoy learning all there is to learn in his large new home. But I still have to promise myself that I'm not gonna cry.

I have three tattoos. One is my home state of Florida above my heart, which I got shortly before leaving for NYC. One is my father's race car number in the crook of my left elbow, which matches the one my brother has. And then there is my tramp stamp, a drawing modeled on this photo of Tai Shan from three years ago: 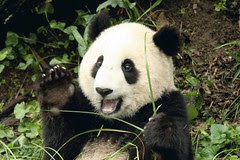 L'Ailee thought it was hilarious, in a good way: "Your panda is so friendly!" she'd exclaim during an intimate moment. She gallantly said she knew why Tai Shan looked so happy, because he had a good view of my rear. My doctors and women in my locker room have remarked on this tattoo as well. (Not many other people have seen it.) I have a souvenir of the wonderful moments where I could count on Tai's goofy sweetness to heal any little hurts I was feeling, and of course, there are other pandas for me to look at and love, too. One day I may even get to go to China and touch one.

I introduced my mother to the PandaCam shortly after Tai's birth. She lived and worked close to DC. Soon we began laughing about Tai's exploits--climbing, wrestling his mother, staying up in his tree alllll night. The National Zoo pandas and NASCAR were and are "safe subjects" for us. We don't have many, especially not this year. Next weekend, I'm going to DC to meet her. (Probably L'Ailee is, too, but we're not sure yet.) We planned to see the pandas. Now we're going to say goodbye. I don't want to, but I'm grateful that I can.
Posted by CrackerLilo at 3:11 PM

Your tattoos sound pretty cool. I have two so far but want to get a couple more.

Thanks for stopping by my blog!

Have a great day,

CrackerLilo
Like the little girl in Lilo and Stitch, only all grown up and a Florida Cracker. As for the rest, y'all will figure it out soon enough.